Advantages of booking on the site:

Payment without commission by card of any bank

Free Wi-Fi throughout the hotel

For reservations of 7 nights or more, a gift transfer

The ability to independently change your reservation in your account

The Grand Hotel Tchaikovsky, being located in a building that is an object of cultural heritage of regional significance, conveys the atmosphere of true St. Petersburg and combines it with modern design and technology.
The design of 69 rooms in 6 categories, which are able to accommodate up to 170 people, is made in a classic modern style, the interior pleases the eye and creates an atmosphere of comfort and convenience. There are available one-room and two-room (family and suite), for romance lovers we offer accommodation in the attic rooms sky. Suites are a perfect choice for the most demanding guests; they have not only two rooms, but also a separate bathroom for each of them. Stylish interior, thought-out to the details, spacious exquisite living room, luxurious bathroom with bath – here is everything to make your stay unforgettable.
There is also a restaurant in the hotel where the buffet breakfasts are served. Lunch and dinner are served for the groups of 8 or more people. All the necessary equipment for conferences and banquets is presented in the restaurant. 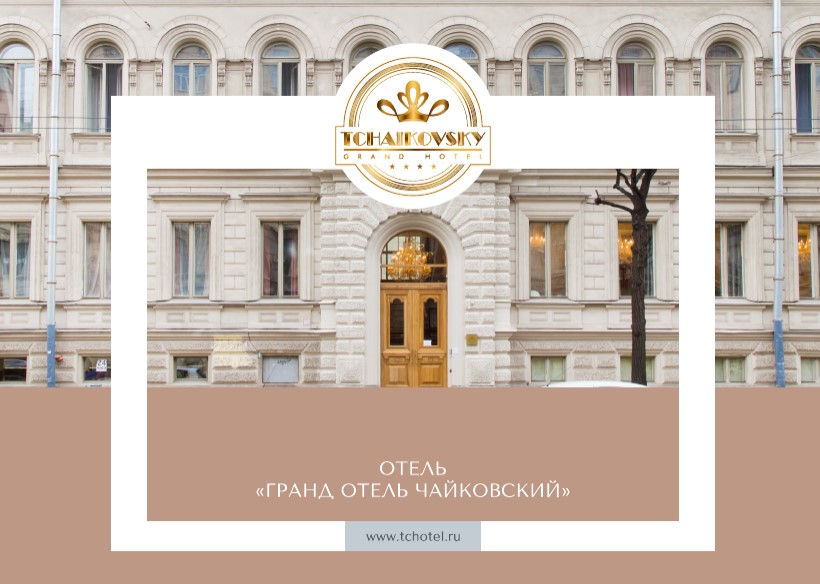 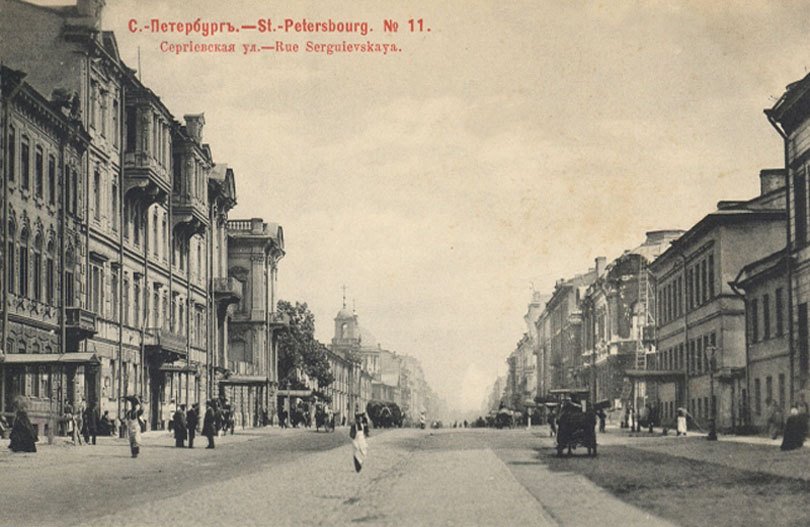 Grand Hotel “Tchaikovsky ”is a hotel located in the historical center of St. Petersburg, in a building on Tchaikovsky Street, which is a Cultural Heritage Site with a long history.

Tchaikovsky Street is one of the oldest in St. Petersburg. It runs from the embankment of the Fontanka River to Potemkin Street. It appeared in 1711 after the founding of the Foundry on the banks of Neva. Workmen began to settle near the production, streets began to be laid. After laying Liteyny Prospect its crossing streets began to appear, running along the Neva. Initially, they were called Pushkarsky lines, but later became known as lines. Modern Tchaikovsky Street then became “3rd  line from Neva River”.

In 1733 Anna Ioannovna issued a decree on the resettlement of artillery officers here. The lines become artillery, the 3rd line from  Neva becomes the 2nd  Artillery. After the construction of the church of Sergius of Radonezh  it became known as Sergievskaya, this name became official in 1762.

Until 1770 Sergievskaya Street did not have a connection with the Fontanka bank, it reached only to the Kosoy Channel (the modern street of the Gunsmith Fedorov). Between the Kosoy Channel and  the Fontanka the ponds were set up to divide fish for the royal table. Here was the reserve yard where the supplies of the royal court were kept. In 1770 the canal and the ponds were filled up, the street was extended to Fontanka.
Until the middle of the XIX century most of the houses here were built of wood, some were with stone bottom and wooden top. In 1848 in the central districts of St. Petersburg it was forbidden to build wooden front houses, since then - stone houses have been built on Sergievskaya Street.

On October 6, 1923 the Petrograd Provincial Executive Committee issued a resolution to name a group of city streets in honor of revolutionary figures, as well as artists. The name also indicated the sphere of activity: the Writer's Channel Griboyedov, Decembrist Petel Street, Zodchego Rossi Street. Sergievskaya street received the name of the composer Tchaikovsky.

Peter Ilyich Tchaikovsky studied at the School of jurisprudence from 1850 to 1859, it was located on the corner of Sergievskaya Street and the Fontanka embankment. Part of the composer's life took place in the house №12 on this street. In 1852-1853 his parents lived in the house №41.
There is a version about the name of Sergievskaya street named after Nikolai Tchaikovsky, one of the founders of the youth revolutionary sections. In the Foundry part of the city many streets are named after revolutionary figures (Pestel, Ryleev). These names were given to streets in 1917, Sergievskaya could be renamed. However, until 1923, the street were always referred to as Sergievskaya. 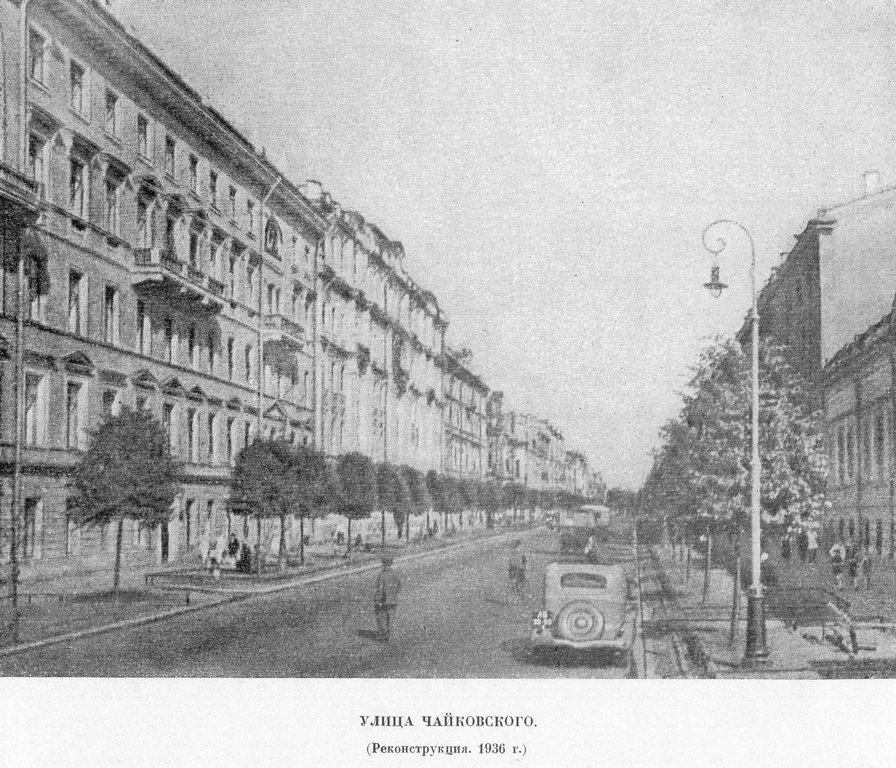 In 1897 trees were planted. In 1928 lawns were established here. In the 1930s Tchaikovsky Street was asphalted. A trolley bus began to walk along it, before the war - with a turn to the Fontanka, after the war – to the Liteiny Prospect.
After the end of the World War II the buildings on the street were repaired, some houses were built on. In the 1950s and 1960s most furnaces were broken during gasification. Wood sheds in the courtyards were liquidated. Playgrounds, sports facilities and  garages were organized on the vacated territory.
House №55 on Tchaikovsky Street, in which the hotel is located, was built in the middle of the 19th century. Until that time at this address there was a wooden house in the 3rd Pushkarskaya line near the stream (section of modern houses No. 53-55), and princess Natalia Alekseevna, whose palace was nearby, adapted it to the theater. Later, in the years 1859-1860 the house was rebuilt into a profitable project designed by architect Ferri de Pigny, at  Sergievskaya Street 55, and belonged to academician architect A.K. Kolman.
In its front building there were huge multi-room apartments - only two on each floor: they had 15-20 rooms. On the 2nd and 3rd floors, in addition to the "masterly" apartments, another 4 apartments were arranged, from 1 to 3 rooms. Their windows faced to the courtyards. Later in different years the house was owned by the count dynasties of Muravyovs and Sheremetyevs, and then up to the revolution it belonged to industrialist, chairman of the Russian-Asian bank Alexei Putilov.
In Soviet times communal apartments appeared here. The building is included in the list of monuments of regional significance: in 2001 the house was included by KGIOP in the "List of newly discovered objects of historical, scientific, artistic or other cultural value"